Tahitian Pearls – An Exotic Twist On A Classic Jewelry Tradition

The legendary “Black Pearl” of Pirates of the Caribbean fame certainly took its name from this exotic and breathtaking jewelry element.  Cultivated only in the seas surrounding French Polynesia and Tahiti – and only since about the 1960’s (well, commercially, anyway) - Tahitian pearls are an exotic twist on one of the world’s most classic jewelry elements; cultured pearls.  While we can’t deliver Johnny Depp in full pirate garb, we can most certainly provide you with your choice of beautiful, certified Tahitian pearls in a variety of pre-set designs or – due to the unique shape of many Tahitian pearls – a custom jewelry design of your choosing for a truly one-of-a-kind piece of exotic pearl jewelry. [caption id="" align="aligncenter" width="300"] 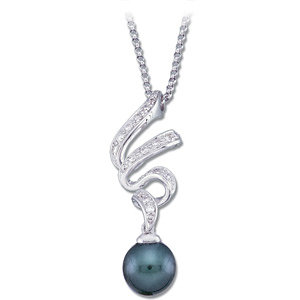 Tahitian Black Pearl and Diamond Pendant[/caption] The Making of a Tahitian Pearl Tahitian pearls, more commonly known as black pearls, are formed in the traditional manner (an irritation within a mollusk which develops over time into a beautiful gem) by Black Lipped Oysters (these days, with the help of cultivators, of course).  Though given the moniker of black pearls, a true black pearl is actually very rare.  Most Tahitian pearls dubbed “black” are actually some range between silver and gunmetal gray, and these “black pearls” can also vary across the spectrum from white to true black, with pink, yellow and dark green being among some of the more sought after options in this exotic pearl jewelry element.  Tahitian pearls can also carry undertones of a secondary color, making each one visually distinct and unique. The Versatility of Tahitian Pearls We generally think of cultured pearls as being round.  And that’s certainly the classic take on pearl jewelry.  While Tahitian pearls certainly can evolve into that classic, round shape, they can also evolve into more unusual shapes such as oval, teardrop, or even baroque (non-typical).  This variety of shape allows for Tahitian pearls to be used in a greater variety of jewelry making applications, and is perfect for unique, custom designs in pearl jewelry. Legacy Jewelry with Tahitian Pearls Whether you’re looking for unique, yet quasi-traditional pearl jewelry for your bridesmaids, or just want to add a real conversation piece to your jewelry collection, you’ll certainly be starting a legacy with a collection of Tahitian pearls.  Each one unique in color and shape, cultivated in the aqua blue waters of an exotic destination… like we said – we can’t deliver “pirate” Johnny Depp…but we can hook you up with your very own “black pearls”.