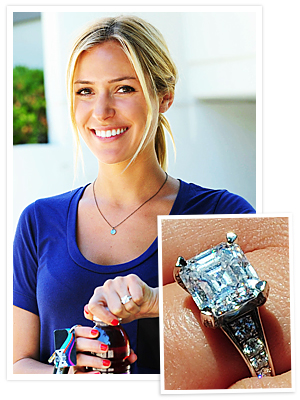 Kristin Cavallari[/caption] We spotted Kristin Cavallari just a few weeks ago, capturing her arrival to the Tacori 'Royal T' celebration recently bith gal pal, newlywed Nikki Reed.  The on-again, off-again relationship with her beau is seemingly very much ON AGAIN, as Cavallari has been photographed on several occasions recently, proudly wearing an incredible engagement ring from Chicago Bears quarterback, Jay Cutler. The engagement between these All-American celebrities was initially called off during the Summer of 2011. Yet, somewhere between July and December the young couple decided to call it back on. To the beautiful celebrity couple, we wish nothing but the very best in their life...together! [caption id="" align="aligncenter" width="485"]

Natalie Finn Reports: "She and Thomas swapped vows in a candlelit ceremony in their suite at the Palazzo on Oct. 23. But even though their engagement was on the down-low, Thomas still made quite the statement: He presented Sadler with a four-plus carat Tacori diamond ring, set in a diamond-and-platinum eternity band, that he helped design." Read more: https://www.eonline.com/news/surprise_es_catt_sadler_married/278862#ixzz1geL30XUQ